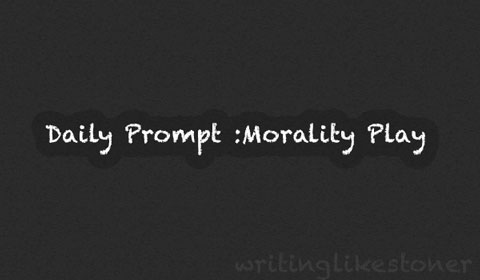 Where do your morals come from — your family? Your faith? Your philosophical worldview? How do you deal with those who don’t share them, or derive them from a different source?

Morals have been taught through my generation of family ever since i was young. Back then, grandma with her own methods, choose to teach me through different warnings. Being in the Singaporean or so-called ‘Asian’ background, if you’ve not known, has one of the most strictest parents, brought it a very conservative nature.

“No staring”, ” “Don’t say pig”, No this and that and what nonsense. “No climbing the walls”, I guess I never would understand why I cant, and if I were to say it or do it, I’ll most likely see the cane gripped into the palm of their hands. That’s when I know ‘okay this is wrong’

Morals was built upon lessons and lessons of trials as a kid. I’ve sooner or later learnt that the more good things I do, the more rewards I’ve managed to get in return. I was annoying and irritating as a kid trying to persuade others into getting what i want, but I’ve learnt that winning the hearts of my parents by being ‘good’ was more effective than trying to whine and get what I want later in life, so that tackled the source of the problem, my morality.

Other than that, morals just came in through reading of books that helps to understand the difference of right and wrong, though sometimes i still do believe that there’s no right or wrong answers, just good and bad choices. Then again, sometimes i believe that there isn’t good and bad choices, so just follow what’s feel’s like its right at that very moment. So now i kind think it’s best to follow what works effective.

I’ve also got to admit, at first it was hard to deal with those who has a different approach to the morality that I have, but I’ve learnt, that not everyone was born in the same way or condition as I was, so their views might be totally different, and i respect that its their morals they choose to live with.

At certain times, I’ll try to give my two cents worth to see if they’re willing to improve or accept a new moral to benefit their life  but not to force them to change, so that it really benefits me.